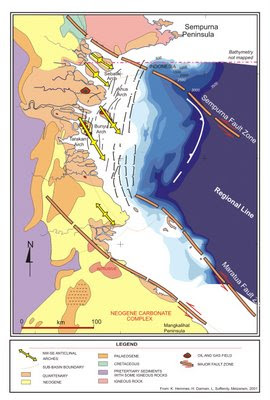 Water depth: Partly onshore, down to more than 3000 m

Significant geological features in the basin: 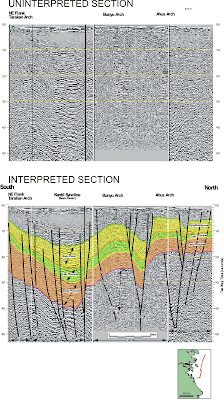 The Tarakan arches are the most outstanding structural features in the western part of Tarakan Basin. Petroleum accumulations occur in these arches.

Each of the arches are named after the islands formed on the surface: Tarakan, Bunyu and Ahus anticlines. Sebatik anticline in the north is not covered by this seismic section. Oil and gas accumulation occur in the Tarakan and Bunyu Island

A quick look at these arches on seismic will give the impression that these arches are a series of simple anticlines and synclines. Detail evaluation indicate strong strike-slip components in these structural features. 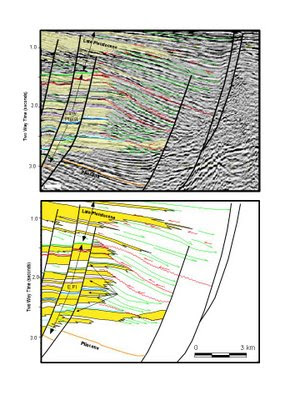 Foresets are clearly seen on seismic section for Pleistocene to Upper Miocene sections. In some sections there are carbonate layers close to the top of the sand sequence, indicating the end of sand supply on that interval.


This seismic section is about WE orientation in the southern part of Tarakan Basin shelf. The yellow units are sand dominated sequence and the blue units are carbonate layers.

The faults are dipping towards the west and the fault system on the right are counter regional faults.