The Northwest Borneo region is devided into Baram & Sabah Basin to the north and Luconia Basins to the south. These two region is separated by a structural lineament so called the West Baram line.

The Baram Basin is located in the northeast of Borneo, partly in Malaysia and the majority of Brunei offshore. Three major fields were discovered in the shallow water and onshore part of this basin called Champion, SW Ampa and Seria.

Along strike (SW to NE) differences in the structural style of both the shelf and deepwater areas of NW Borneo define four transverse structural domains in the Baram Basin. The B-C and C-D domain boundaries appear to be basement controlled, whereas the A-B boundary is interpreted to reflect differences between the Baram and the Padas- Champion depositional systems (Cullen, 2011). The deepwater structures in Domain A are characterized by high amplitude, symmetric, detached folds (Figure 3). The deepwater parts of Domains B and C are dominated by asymmetric fault-propagation folds that ultimately root into a common detachment level (Figure 4). The structural style of Domain A likely reflects the presence of low strength, possibly overpressured, mud-rich rocks that deform by penetrative bed-parallel slip (Erslev and Hennings, 2003), which is consistent with a provenance of the shale-prone hinterland for the Baram Delta.


The deepwater sediments in Domains B and C are derived primarily from the Padas River catchment where the bedrock geology is dominated by sandy turbidites of the Crocker Formation. The fault propagation folds in the deepwater area of Domains B and C suggest a stronger mechanical stratigraphy than in the detached folds of Domain A, which is consistent with a higher percentage of sandstones in Domains B and C owing to a provenance in the Padas River catchment. Although differences in the total amount of strain in different domains of the NW Borneo fold and thrust belt may account for some of the differences in the structural styles between domains, lithology and layering represent more fundamental controls on such interrelated variables such as the strength of basal detachment, the coefficient of internal friction and the critical taper angle.

To southwest the Baram Basin is bounded by West Baram Line, to the north by Northwest Sabah Trough and to the east by the Sabah Inboard.

Seismic lines from structural Domains A and B illustrating the different structural styles in the deepwater fold and thrust belts of those domains. MMU is a Middle Miocene unconformity above which a regional detachment level appears to represent a mechanically weak decollement (Cullen, 2011).

Regional seismic cross section in the southwestern part of Baram Basin. SW Ampa Field is shown on the seismic section as a large anticline (Fig. 5). A large down-to-basin fault developed in the west of Gannet well. Merpati is a gas discovery in the deep water play of Baram Basin. Several other large anticlininal features developed in the slope of part of the Baram Basin, mainly consists of deep water deposits.
.
Regional seismic section in the eastern part of Baram Basin (Fig. 6) with Champion Field on the right of the section, located on a large structural high. Frigate counter regional fault developed almost at the center of the cross section. Large anticlinal features developed in the west at the slope part of the Baram Basin. The basinal part of the basin has less structure. See Figure 7 for a close-up seismic section of the Champion Field section.
A close up seismic section of the east regional seismic section, showing some detail of the Champion Field. There are two down-to basin growth fault in this area, so called Sliver Fault and Champion Growth Fault. Poorer seismic image beneath the Champion structural high is interpreted as a shale diapir. Recent data, however, give better imaging on the deeper part of this section.


Detail seismic section of anticlinal features which formed by thrust faults (toe-thurst anticlines) in the deeper water part of Baram Basin. The structure on the left has a flat spot which indicate some hydrocarbon content.

Another sample of time slice at shallower level is shown in Fig. 10. This section goes across the transparent interval, which mainly composed of deepwater shale.

The transparant interval is a shale formation, often called the 'transparant shale' sequence.

Potential hydrocarbon indicator at the core of the anticline. (Seismic courtesy: PGS)


Additional sections are included in Ngah (1994) article. Two sections from Sabah Basin are displayed here. Sabah deepwater seismic section has a steep deeping bathymetry. The young transparent section which is a shale dominated section is similar to those found in Baram Basin. Young faults are expressed well at sea bottom.


The seismic profile in Tenbungo area has more relief on the sea bottom, formed by young faults and erosion

Jong et al., (2015) have put a number of seismic sections around Borneo basins and put them in the same scale. This exercise give a good picture of the basin features and their magnitudes.  In the index map, section 2, 3, 4 and 5 are located in Baram-Sabah basin. 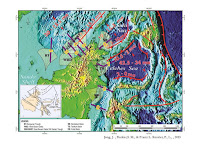 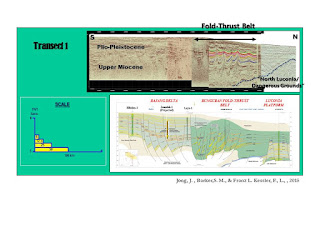 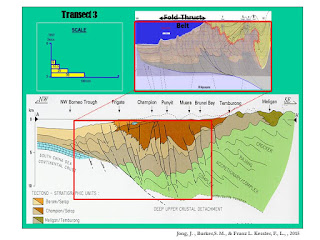 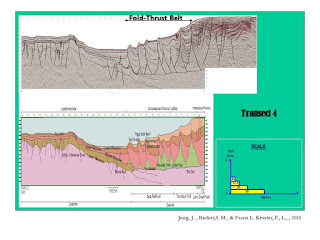