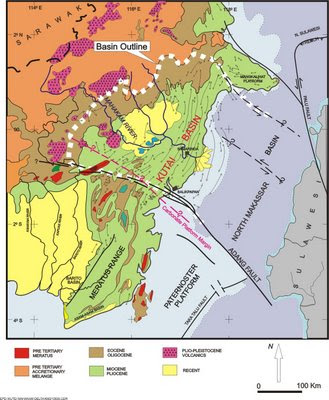 Water depth: Partly onshore, down to more than 3000 m. The deeper water part is also known as the Makassar Strait basin. 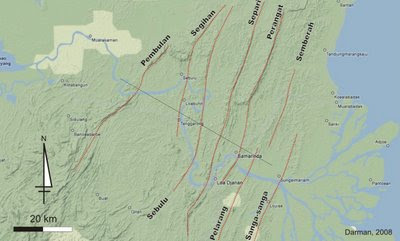 Samarinda anticlinorium map, showing the NNE-SSW trend anticlines and structures in dashed red line. The location of the seismic line across this area is shown in black line. 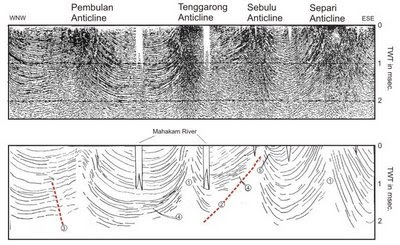 A highly squeezed regional seismic line (40 km long), crossing four major aniclines within the Samarinda Anticlinoium. In the absence of palaeontlogical data correlation across these anticlines is very difficult (dips vary from 0-75 degrees). Cores of anticlines appear to be chaotic on seismic (1) and bounding faults (2) are difficult to pick. Also visible are down-to-basin syn-depositional faults (3), west-to-east progradational downlaps (4) and evidence of syn-depositional structuring (5) indicating that uplift was occuring at the end of the Early Miocene (from Carter and Morley, 1996).

A detail seismic section across Separi anticline with detail seismis character of the structure. Note the higher topographical relief at the core of the anticline, indicating the location of outcrops. The outcrops are dominated by deltaic sandstone-shale facies and limestones beds.
Posted by Darman at 10:33 PM