The Southeast Asia region is situated on a crossroad between two oceans, the Pacific and Indian oceans, and bridges two continents, the Sundaland (Asian) and the Australian (Sahul Shelf). Physiographically, the islands of Sumatra, Java and Borneo are attached to the Sunda Shelf of the Asian continent. On this 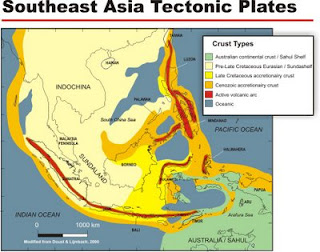 landmass the water depth does not exceed 200 meters. To the east, Papua Island and the Aru islands lie on the Sahul Shelf, which are parts of the Australian continent. Located between these two shelfal is the island grop of Sulawesi and Halmahera. These islands are encircled by deep seas which in many places reach 5,000 meters. About 70Tertiary sedimentary basins identified in this region, spread out from Myanmar in the west to West Papua in the east. So far about 50 basins have been explored and drilled for petroleum and 20 of the are now producing oil and gas. Seventy five percent of these basins are located offshore, about one third of them in the deeper sea, with water depth exceeding 200 m.
Posted by Minarwan (Min) at 10:12 PM