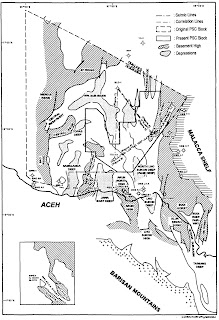 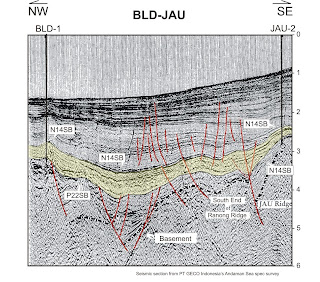 
Geoseismic Line BLD-JAU showing northwesterly dipping half grabens filled by the Late Oligocene sediments that underlie the P22 SB. The P22 SB represents a boundary of major shift in depositional environments from a fluvial setting below the SB to a bathyal setting above the SB (Tsukada et al. 1996). 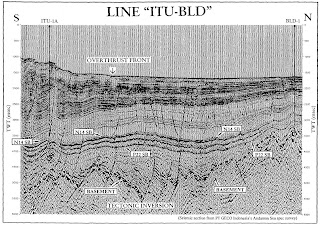 
Geoseismic Line ITU-BLD showing a young overthrust front (see annotation) located in the deepwater offshore North Sumatra. The syn-rift megasequence was deposited above half grabens and tilted fault blocks as shown below approximately 4 s (overlain by the P22 SB). Evidence of tectonic inversion is shown by the folding of the P22 SB, N14 SB and other younger reflectors that was controlled by the half graben (after Tsukada et al. 1996). 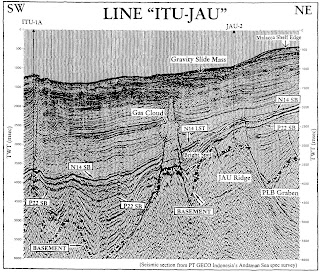 Geoseismic Line ITU-JAU shows Jambu Aye Utara Ridge (JAU Ridge) located on the northeastern side and the NW extension of the North Lho Shukon Deep (Tsukada et al. 1996). The Lho Shukon Deep is the main source rock kitchen that supplies gas to the surrounding major fields such as the Arun Field. 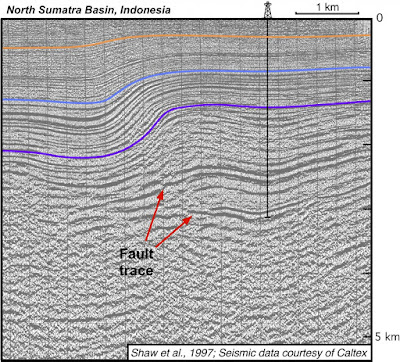 Sample seismic reflection image acquired in the North Sumatra Basin, Indonesia. The folded sediments, which appear as dark and white lines, are deformed by a deeper fault. The magnitude of deformation decreases upward, indicating that these sediments were deposited while deformation was occurring (past 20 million years). As a consequence, the units at the surface appear nearly flat, despite the large fault that lies beneath (Shaw et al, 1997)


PGS in cooperation with MIGAS, has acquired 7,756 line km of MultiClient 2D (NS-06 & AS-08 MC2D) data, located in the North Sumatra Basin, Offshore Indonesia. Most of the area covered by the survey is largely under-explored, except for the platform areas to the east over the NSO block and the near coastal areas. The water depth ranges from very shallow in the coastal areas to deeper than 1,000 m in the central parts of the basin. The detail is available here. 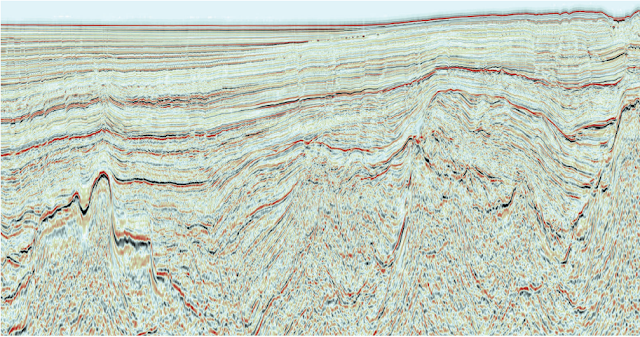 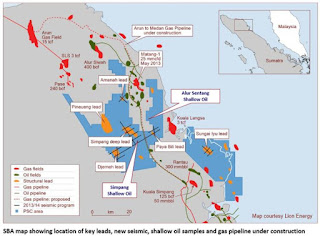 ONSHORE
Onshore North Sumatra has one of the longest petroleum history. A number of fields were discovered and the basin is considered mature from exploration perspective. Lion Energy has published a map which shows the main fields and prospects. Some seismic sections were compiled in this chapter. 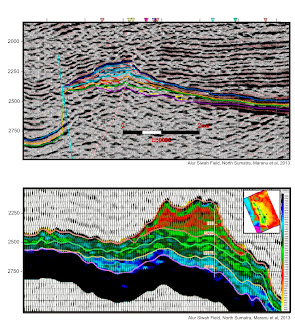 In 2013, Maranu et al, published an article related to the reservoir characterization of Alur Siwah field. Several seismic sections were published in this article. Two of them have clearly shown a carbonate build up feature.

Strong reflector has significantly form an envelop of the carbonate unit. The reflectors above it shows onlaping feature towards the carbonate structure.

The section below shows the absolute AI section through AS-7a line. The red color in this section shows the carbonate build up. 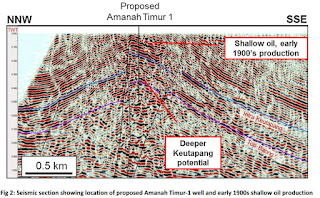 Peak Oil has proposed a prospect to be drilled, called Amanah Timur-1. The detail of the prospect is available in their brochure with the following link.
Posted by Minarwan (Min) at 10:50 PM

North Sumatra is mainly sourced by Parapat which is a syn-lift lacustrine shale facies. Bampo as a source is yet to mature i guess , though it has good generation potential.