The western Indonesian fore-arc basins extend more than 1800 km from northwest of Aceh to southwest Java. The width of the basins varies from less than 70 km south of the Sunda Strait to about 120 km in the west off northern Sumatra. The basins form a strongly subsiding belt between the elevated Sumatra Paleozoic–Mesozoic arc massif cropping out along Sumatra and Java, and the rising outer arc high.
Description of the data examples from SW Sumatra is found in Susilohadi, S., C. Gaedicke and A. Ehrhardt, 2005. "Neogene structures and sedimentation history along the Sunda forearc basins off southwest Sumatra and southwest Java." Marine Geology 219(2-3): 133-154.
Schlüter, H.U.,Gaedicke, C., Roeser, H.A., Schreckenberger, B., Meyer, H., Reichert, C., Djajadihardja, Y., Prexl, A., 2002. „Tectonic features of the southern Sumatra–western Java forearc of Indonesia." Tectonics 21 (1047), 11-1–11-15.
Description of the data examples from NW Sumatra is found in
Berglar, K., C. Gaedicke, R. Lutz, D. Franke and Y. S. Djajadihardja, 2008. "Neogene subsidence and stratigraphy of the Simeulue forearc basin, Northwest Sumatra." Marine Geology 253(1-2): 1-13. 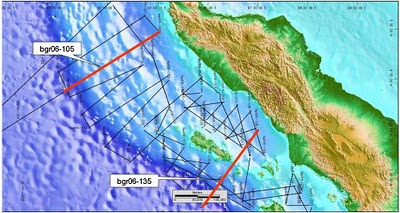 The Great Sumatra Earthquake three years on: results from the Tsunami deep seismic survey using advanced seismic technology
by Gordon Brown, WesternGeco
Petroleum Exploration Society of Great Britain (PESGB Newletter), June 2008
On December 26, 2004, the Sumatra ¬Andaman earthquake, with an estimated magnitude of 9.3 on the Richter scale, was one of the largest ever recorded using mod¬ern seismographic equipment. As it shook the west coast of Sumatra, Indonesia, and proceeded along a fault line at the eastern edge of the Indian Ocean, the earthquake generated a tsunami that focused the world's attention on the devastating power of this natural phenomenon. With estimates of more than 232,000 deaths and 2,000,000 people displaced in 12 countries in South Asia and East Africa, the impact of th
e tsunami was truly global.In contrast to the devastation inflicted by the tsunami when it reached land, the passage of the tsunami in the Indian Ocean would have gone unnoticed by vessels at sea. One such vessel in the path of the tsunami wave was the WesternGeco survey vessel Geco Topaz. Although not apparent to the ship's crew, the effect of the tsunami was recorded as inter¬ference noise on the recordings made by the seismic crew. Figure 1. shows the effect this noise had on the online brute stack processed onboard Geco Topaz. 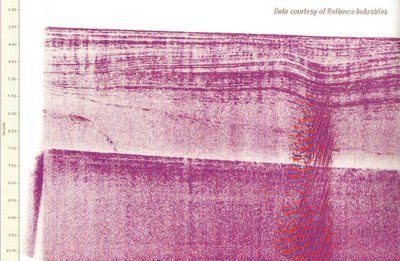 
Within days following the earthquake, humanitarian relief poured into the region surrounding the Indian
Ocean. Individuals and organizations around the world offered help in the form of donations and services. On the technology front, Schlumberger offered to support a deep seismic survey around the fault line to improve the under¬standing of the complex tectonics in the region of the earthquake. This survey became known as the Sumatra Earthquake Deep Seismic Reflection survey, or the "tsunami survey". The vessel Geco Searcher, equipped with Q-Marine technology, was used for the acquisition of seismic data in conjunction with Schlumberger Cambridge Research in England and the Institut de Physique du Globe de Paris in France.
In July 2006, the Geco Searcher acq
uired three seismic lines, totaling 926 km of deep seismic profiling. The main objectives of the survey were to image faults along the subduction zone and provide information to optimize the location of a fut
ure borehole for the Integrated Ocean Drilling Programme. Figure 2 shows the survey area and the loca¬tion of the three seismic lines recorded along with bathymetry data. Prior to the acquisition of the seismic data the survey parameters had to be designed to accommodate the depth of the required image. At more than 30km these depths are far in excess of those commonly associated with oil exploration. Major acqui¬sition parameter modifica
tions were required to the offsets (streamer length), recording time and strength of the energy source.
The talk will review the survey design, acquisition and processing of the data along with some suggested interpretations of


the deep crustal profiles. An example of the data is shown in Figure 3. 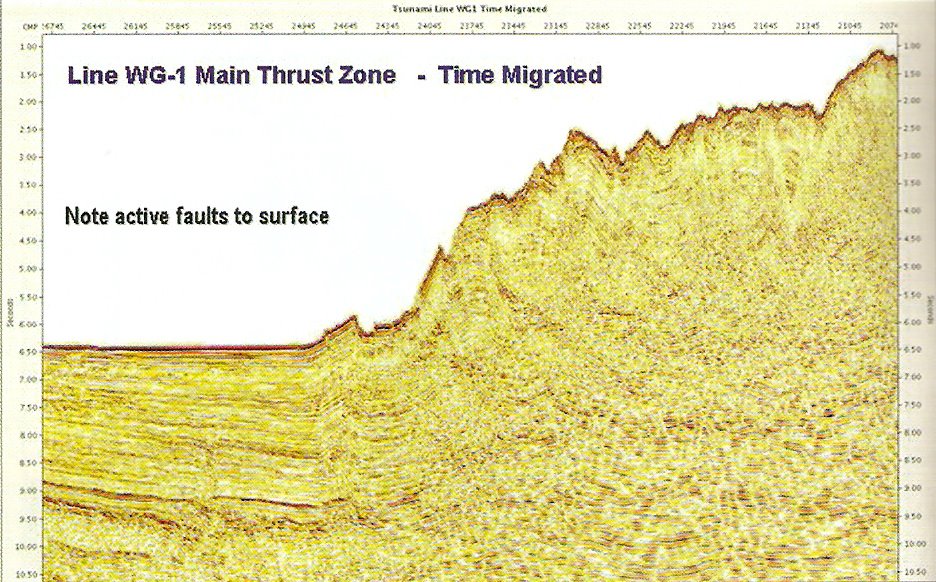 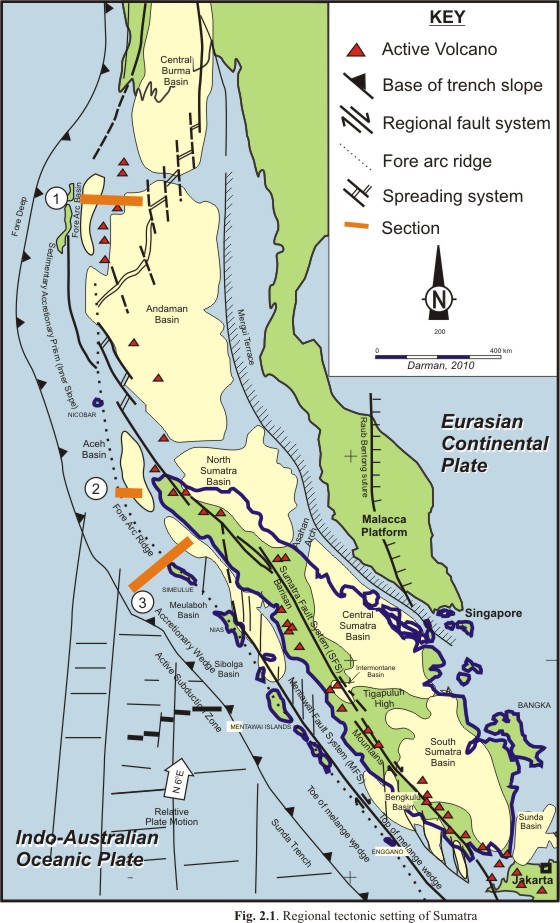 Seismic Expression of Some Geological Features of Andaman-Offshore West Sumatra Subduction zone
erman Darman (Shell International E&P) - Berita Sedimentologi #20, February 2011
A sub
duction zone developed in the south of , continue to the (), west of Sumatra and south of Java (). Two major fault system developed parallel to the subduction zone, so called the Mentawai Fault System and Sumatra Fault system. To the north, where the subduction zone changes its orientation from NNW-SSE to NS, a spreading zone developed towards the east of (Figure 1). This zone is a complex and active geological system. The 2004 Aceh Tsunami was a major disaster which was triggered in this subduction zone.
The Andaman - Offshore subduction system is where part of the Indo-Australian oceanic plate moving northwards and going b
eneath the southern tip of Eurasian continental plate. , which is part of Indonesian volcanic island arc, occurs parallel to and inland from the boundary between these two plates. An accretionary prism or wedge has formed from sediments that accreted onto the non-subducting plate. Most of the material in this wedge consists of marine sediments scraped off from the downgoing slab of Indian oceanic plate with some erosional products of volcanics. Fore-arc ridge in this system is a chain of islands (e.g. Andaman, Simeulue, Nias, Mentawai, and Enggano), formed by the accretionary wedge. A series of fore-arc basins developed between the accretionary ridge and the volcanic arc (Figure 2).
This region is also an active p
etroleum exploration area. Recently, there are a number of companies (e.g. Spectrum, TGS and Geco) provide new and reprocessed seismic lines to the market. These seismic lines show the geological features in this subduction system. 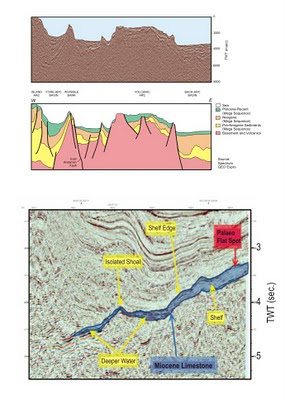 2010 articles in Geo-ExPro and AAPG Explorer displayed seismic sections of . These sections were recently reprocessed by Spectrum in 2010 to support exploration licenses by the
Indian authority. The regional seismic section shows a submarine volcanic arc, which separates the back-arc basin from the fore-arc basin. East Andaman fault system developed bathymetric high called ‘invisible bank’ in the middle of the fore arc basin. Part of the fore-arc is shown on the west of the section. Further west of this section the fore arc ridge appear to the sea surface as (Figure 3).
The interpretation suggest Pliocene-Recent stratigraphic interval at the shallowest section. This unit thins in parts due to volcanic activity and fault movement. Neogene units are thicker in the back arc basin compare to the fore-arc basin. The majority of the back-arc basin is deeper than 3000 MSec. TWT.
A seismic section published in AAPG Explorer show a Miocene Limestone unit which this towards the deeper water. The interpretation also indicates a shelf deposit, shelf edge and an isolated shoal (Figure 4). The shelf unit is about 3-4 Msec. TWT deep.
The Neogene unit is underlain by
Pre-Neogene sediments which is thins towards the volcanic arc. In parts the pre-Neogene sequence has been completely eroded away. This unit seems thicken to the west of the section in the fore-arc ridge zone. It is believed that the deeper stratigraphic unit has limited data control.
2. West Aceh Section (Profile Sumenta 32)

A seismic section published by Malod et al is a result of Baruna Jaya shallow seismic survey in 1991. The survey is part of collaboration between Indonesian and government.
This short section shows a reverse fault which bound the west part of the fore-arc basin (Figure 5). The fault goes all the way to the sea floor at about 3.5 sec. TWT, separating the accretionary prism from the fore-arc basin. The accretionary prism in the SW of this section is clearly shown as a bathymetric high and the fore-arc basin appear as a flat sea base.
The fore-arc basin was filled with Late Miocene and younger deposits. Flat reflectors shows that there were very little tectonic impact on this area despite the major earth quakes and tsunami developed in this region.
Unfortunately the seismic section is too short and too shallow to show the regional picture. The complex geology in the accretionary complex result in unclear seismic expression in this area. 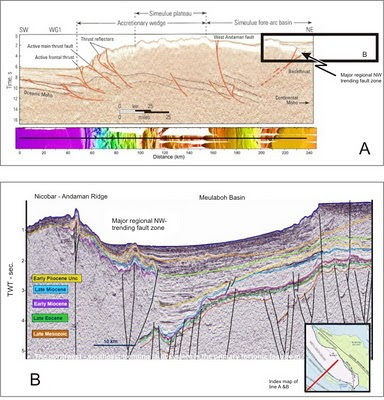 In July 2006, Geco acquired 3 deep seismic sections in offshore west Aceh. (Bunting et al, 2007) to image active faults along the subduction zone, quantify the volume of water that penetrated along these faults and provide information to optimize the location of future borehole location for the Integrated Ocean Drilling Program (IODP).
The seismic section is more than 16 sec. TWT deep and show the oceanic Moho on the SW of the section. An indication of continental Moho appears in the NE of the section. The section also shows the trench and the accretionary wedge of the subduction zone (Figure 6).
Slightly to the south of this line, TGS shot some seismic which was focused on the fore-arc basin. The seismic section clearly shows the fore-arc ridge and major regional NW trending fault zone in the SW of the section (Figure 7). In the NE, present day shelf deposit is well imaged. Meulaboh fore-arc basin has thick post late Miocene deposit adjacent to the NW trending fault zone as this fault generate an accommodation space fore about 2 sec. TWT deep. 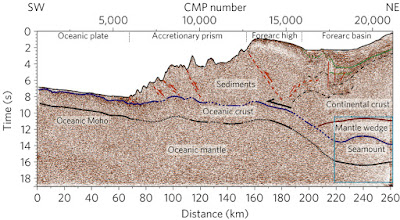